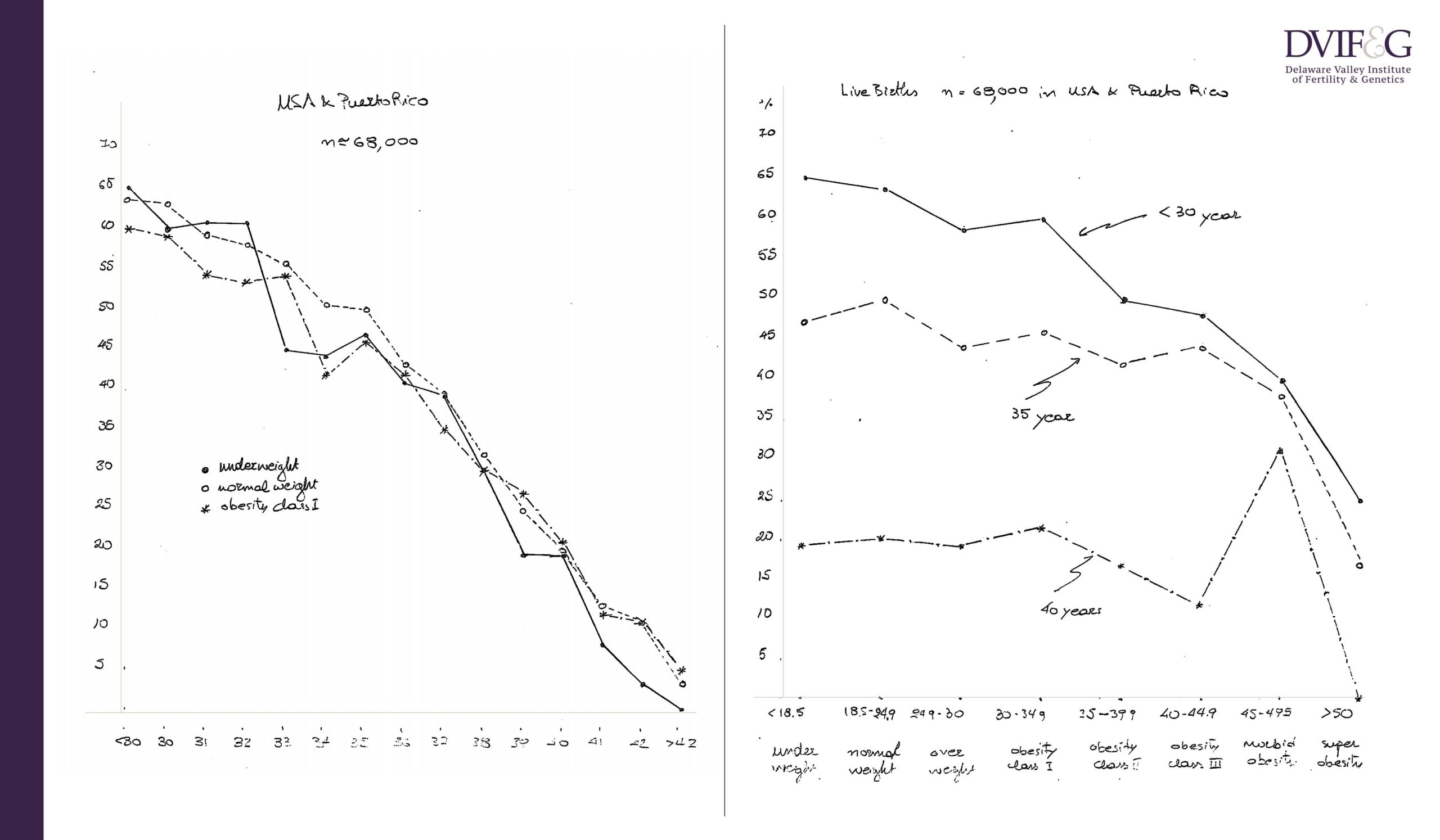 In 2007 The Society of Assisted Reproductive Technology (SART) compiled the information from all the clinics in the United States (US) that performed in-vitro fertilization (IVF) treatments and compared the live birth rate and the frequency of miscarriages to the body weight of the treated patient. There were over 45,000 cases reported in that year and this was the first time that SART requested that the body weight of the patients to be included in the information submitted by the reporting clinics. A table was included in that report (Human Reproduction 2011, vol 26, No. 1, p 245-252). We plotted the reported the data and it was clearly apparent that with an increase in the body weight there was also an increased difficulty in achieving pregnancy through IVF. This difficulty was much more prominent among younger patients (<35 years old). In addition there was an increased miscarriage rate and the body weight increased. (Figure 1)

Eleven years later a prize winning presentation at the 74th annual meeting of the American Society of Reproductive Medicine (ASRM) analyzed the available information collected from the reporting clinics in US from January 2014 to December 2015. This time the number of cases was 68,000. They came to the same conclusion, with an increase in the body weight there is a decrease in the rate of live births through IVF irrespective of the age of the patients. This information was published to the American Journal of Obstetrics and Gynecology (Am J Obstet Gynecol 2019:221:617 .e1-13). A table was included as well. We created two graphs from these data, one that shows the gradual decline in live births with increasing weight for patients that are less than 30 years of age, 35 and 40 years of age. The trend is the same and of course with advancing age the pregnancy rate decreases. (Figure 2)

Then we plotted the pregnancy rate for underweight, normal weight and patient with obesity class I and again the same trend of decrease in live births was apparent with increasing age irrespective with the particular weight. (Figure 3)

So beside the reconfirmation that the body weight has an impact on the pregnancy rate another established information was reaffirmed, that of the age effect. But in all these curves that we drew, and all the others that we did not include, they have an even down slope transition and there was no a deflection of the curve, a sharp change in its direction at any particular age, what is statistics called spline. This is important because the results derived from a large sample and include all the patients that underwent IVF in US and Puerto Rico! In other words the patient should not be alarmed and anxious because they approaching age 35 because they is not going to be any abrupt change in the chances of becoming pregnant, no acceleration, just the natural occurring decline experienced in the previous years of age! We have found that this was true several years ago when we analyze the data in our practice. (Figure 4)

Details Matter… It’s Worth Waiting To Get It Right